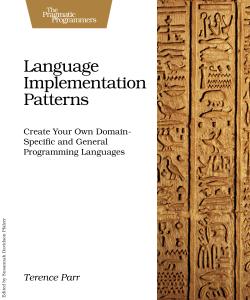 Create Your Own Domain-Specific and General Programming Languages

Knowing how to create domain-specific languages (DSLs) can give you a huge productivity boost. Instead of writing code in a general-purpose programming language, you can first build a custom language tailored to make you efficient in a particular domain.

The pattern implementations use Java, but the patterns themselves are completely general. Some of the implementations use the well-known ANTLR parser generator, so readers will find this book an excellent source of ANTLR examples as well. But this book will benefit anyone interested in implementing languages, regardless of their tool of choice. Other language implementation books focus on compilers, which you rarely need in your daily life. Instead, Language Design Patterns shows you patterns you can use for all kinds of language applications.

Terence Parr is a professor of computer science and graduate program director at the University of San Francisco, where he continues to work on his ANTLR parser generator (https://www.antlr.org) and template engine (https://www.stringtemplate.org). Terence has consulted for and held various technical positions at companies such as IBM, Lockheed Missiles and Space, NeXT, and Renault Automation. Terence holds a Ph.D. in computer engineering from Purdue University and was a postdoctoral fellow at the Army High-Performance Computing Research Center at the University of Minnesota, where he built parallelizing FORTRAN source-to-source translators. He is the author of The Definitive ANTLR Reference.