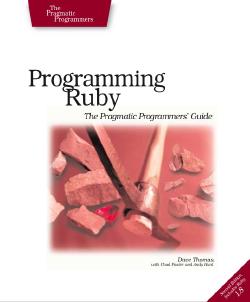 by Dave Thomas, with Chad Fowler and Andy Hunt

The Pickaxe book, named for the tool on the cover, is the definitive reference to Ruby, a highly-regarded, fully object-oriented programming language. This Second Edition has more than 200 pages of new content, and substantial enhancements to the original, covering all the new and improved language features of Ruby 1.8 and standard library modules.

What Version of Ruby are You Using?

Alternatively, if you want to continue to use Ruby 1.8, then use the book on this page.

Would you like to go from first idea to working code much, much faster? Do you currently spend more time satisfying the compiler instead of your clients or end users? Are you frustrated with demanding languages that seem to get in your way, instead of getting the work done? If so, then we’ve got a language and book for you!

The combination of the power of a pure object-oriented language with the convenience of a scripting language makes Ruby a favorite tool of intelligent, forward-thinking programmers.

Readers of the First Edition will appreciate the new and expanded content, including: enhanced coverage of installation, packaging, documenting Ruby source code, threading and synchronization, and enhancing Ruby’s capabilities using C-language extensions. Programming for the world-wide web is easy in Ruby with new chapters on XML/RPC, SOAP, distributed ruby, templating systems and other web services. There’s even a new chapter on unit testing.

This is the definitive reference manual for Ruby, including a description of all the standard library modules, a complete reference to all built-in classes and modules (including more than 250 significant changes since the First Edition). Coverage of other features has grown tremendously, including details on how to harness the sophisticated capabilities of irb, so programmers can dynamically examine and experiment with running code.

An example from the Built-in Classes and Modules chapter.

Dave Thomas is a cornerstone of the Ruby community, and is personally responsible for many of its innovative directions and initiatives. He and original co-author Andy Hunt are founders of the Pragmatic Programmers and the Pragmatic Bookshelf. Chad Fowler is co-director of Ruby Central, Inc., and remains an active, driving force in the Ruby community.