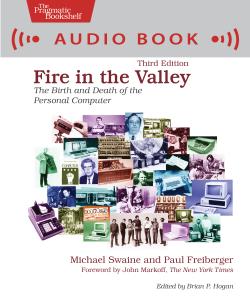 Fire in the Valley

The Birth and Death of the Personal Computer, Third Edition

by Michael Swaine and Paul Freiberger, narrated by Don Azevedo

In the 1970s, while their contemporaries were protesting the computer as a tool of dehumanization and oppression, a motley collection of college dropouts, hippies, and electronics fanatics were engaged in something much more subversive. Obsessed with the idea of getting computer power into their own hands, they launched from their garages a hobbyist movement that grew into an industry, and ultimately a social and technological revolution. What they did was invent the personal computer: not just a new device, but a watershed in the relationship between man and machine. This is their story.

Listen to an excerpt from Chapter 1.

Buy the audiobook here for $23.00 Available in mp3, m4b, and ogg formats except as noted.

Fire in the Valley is the definitive history of the personal computer, drawn from interviews with the people who made it happen, written by two veteran computer writers who were there from the start. Working at InfoWorld in the early 1980s, Swaine and Freiberger daily rubbed elbows with people like Steve Jobs and Bill Gates when they were creating the personal computer revolution.

A rich story of colorful individuals, Fire in the Valley profiles these unlikely revolutionaries and entrepreneurs, such as Ed Roberts of MITS, Lee Felsenstein at Processor Technology, and Jack Tramiel of Commodore, as well as Jobs and Gates in all the innocence of their formative years.

This completely revised and expanded third edition brings the story to its completion, chronicling the end of the personal computer revolution and the beginning of the post-PC era. It covers the departure from the stage of major players with the deaths of Steve Jobs and Douglas Engelbart and the retirements of Bill Gates and Steve Ballmer; the shift away from the PC to the cloud and portable devices; and what the end of the PC era means for issues such as personal freedom and power, and open source vs. proprietary software.

Q & A with Authors Michael Swaine and Paul Freiberger:

Q: The New York Times reporter John Markoff’s Foreword to your book says that your location is what sets your book apart from dozens of others that attempt to tell the story of the computer revolution. Do you agree?

Mike: Absolutely. Paul and I were working and living in Palo Alto, a few blocks from Stanford University and 20 minutes from Apple headquarters. Each day we would be on the phone discussing the latest events in the field and we’d visit the companies and talk to the founders at their headquarters and their favorite watering holes.

Q: So you wrote Fire in the Valley so you could go drinking with Bill Gates and Steve Jobs?

Mike: Well, maybe. But that’s not the only reason. We did spend a lot of time at the Oasis, a pub where the Homebrew Computer Club members would congregate each week to discuss their startup companies and the latest technology developments, and to deal.

Q: Why did the two of you write Fire in the Valley?

Paul: We saw the personal computer industry emerging and we thought it just might have a major impact on society. We also were super impressed with the founders of the hardware and software companies who were smart and highly ambitious. We believed that this field might change the world and we wanted to document it for others and give you a sense of being close to an amazing movement.

Mike: I had been working in one of the first computer stores as a programmer. When I got my first computer, a TRS-80 Model 1 and I was seeing all these crazy people trying to run their business on these computers. I wanted to be as close to the industry as I could get.

Paul: We were working on news stories each day and after talking about new products we would ask the company founders about how they started their companies and ….

Mike: And they would reminisce about two years ago.

Q: What does the subtitle of the book mean, “The Birth and Death of the Personal Computer?"

Mike: The image of what a computer was back in the 1970s was a dream of unlimited power. Today the capabilities that were in the PCs are fragmented into different devices. The devices don’t feel like computers, and they are not intended to.

Q: Are there surprises in Fire in the Valley?

Mike: Such as the time Steve Wozniak and Steve Jobs built blue boxes to make free long distance phone calls. Woz was especially a practical jokester and we recount some hilarious tricks that he played on friends and colleagues. He told us about them when we visited him in his dorm room when he went back to college to finish his degree.

Paul: And the personal computer company founders made every possible business mistake you can imagine. It’s kind of refreshing to remember the innocent idealism of those days of a lot of the industry’s founders. This book is about an amazing group of people and we should appreciate them—those that succeeded like Jobs and Gates, and others that didn’t but still played a key role.

Q: What will a reader come away with from reading Fire in the Valley?

Mike: We hope you come away from the book with a feeling that these folks changed the world—not just in a technological way. I hope you ask yourself what we have learned from this era and were there values introduced that are worthy of preserving. Are there lessons that we’ve all learned?

Listen to a free excerpt from the first chapter

Best known as the editor of Dr. Dobb’s Journal, Michael Swaine created or helped launch a dozen magazines, from InfoWorld to PragPub. He has written more than a thousand articles and columns for publications ranging from the Farmer’s Almanac to MacUser. He currently edits books for the Pragmatic Bookshelf and is working on a mystery novel set in the mythical Northwest State of Jefferson.

Paul Freiberger is an award-winning author, inventor, and former journalist. His books include Fuzzy Logic, which won the Los Angeles Times Book Prize. He has written thousands of newspaper and magazine articles and columns, as well as speeches, white papers, and op-eds for top publications such as the Wall Street Journal.

Don Fernando Azevedo, Ph.D. is a voice talent, clinical psychologist, executive coach, and leadership trainer with 28 years of experience working with individuals, families, work teams, and Fortune 500 companies worldwide. In 2012 he founded Bear Cave Audio with his son, Ben, as his audio engineer and creative director. He lives in Cary, NC with Janice, his wife of 33 years; his daughter, Kym; and their dog, Tug.

Buy the audiobook here for $23.00 Available in mp3, m4b, and ogg formats except as noted.